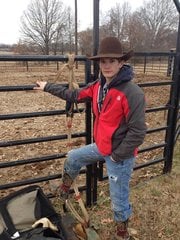 KENTON, Tenn. – The only thing that matters is the number of seconds. At age 11, Corey Bailey rode his first bull. Now, the Paris native is ranked third in the Championship Bull Riding World Standings. “Wouldn’t call it, guess you can call it crazy. But not much I can really say about it,” says Bailey humbly. The 22-year old tried other sports. None of them stuck. Bull riding is in Bailey’s blood. “It’s just crazy. If I could do it everyday, I would do it everyday,” explains Bailey. The former 3-time Tennessee High School State Rodeo Champion has had some unpleasant experiences though. “I’ve been lucky. I broke my nose in six places and had to have reconstructive surgery. Other than that I’ve had bumps and bruises.” Bailey’s next goal is simple. Bringing the Jackson Championship Bull Riding title back to Tennessee. “There’s quite a bit of pressure going into it. It’s my home state. You know i wanna win it. All i can do is do my best and hope for the best,” Bailey says in regards to the CBR Bud Light Riding Classic.