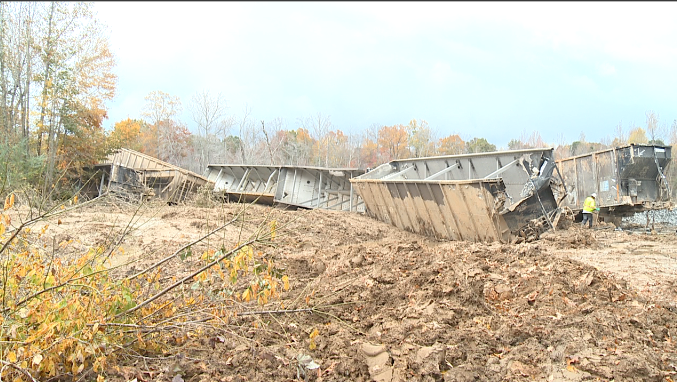 BENTON COUNTY, Tenn. — In Benton County, crews are still cleaning up after a Sunday derailment of a freight train. Trains now rumble down the tracks once again, and erosion of a levee at a nearby quarry is considered the reason behind Sunday’s significant damage. “They need to take and build them a concrete wall around that pond,” Carl Robbins said. Officials say the derailment was caused after a nearby levee gave way, sending water rushing and washing out the tracks. “I had no idea there was anything there that big,” Merv Vires said. “It had to be a tremendous amount of water.” Wayne Warren owns a garage right on the tracks. He said after flood waters destroyed his property a few years ago, he built concrete barriers to protect himself. “It deflected the water,” Warren said. “It sent the water down the tracks so it wouldn’t come up on my property.” With so much property damage in other areas, residents said the owner of the quarry, Unimin, needs to pay up. “I think they’re responsible for it,” Vires said. “It was their doing. So whatever damage it did, and I’m sure it did a lot of damage to the railroad.” According to CSX, workers will be out on the scene over the next few days removing the rest of the train cars and repairing residents’ property.