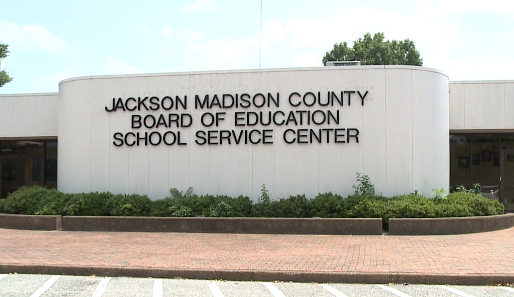 JACKSON, Tenn. — The Jackson-Madison County School District got its annual report card from the Tennessee Department of Education Thursday and showed significantly lower scores from last year. In benchmark subject areas of reading and math, the district, made up of more than 13,000 students, is failing. The TDOE uses a system to measure academic progress and it showed the lowest possible scores for Jackson-Madison County. Overall, the district was ranked at the lowest level for literacy and numeracy, or math, during the 2013-2014 school year. Parents said they are surprised. “You know it is a disappointment but we have so many things in the Jackson-Madison County School System that I’m in every single day to see that we are they’re trying,” parent Jeff Wall said. According to the report, schools in the district fell into the least effective category when it comes to students making academic progress. Wall said while the results are disappointing he believes the schools are trying. “We have a great group of teachers, great group of administrators that are trying to bring those scores up every single day,” Wall said. The failing score comes just one year after the district earned the highest possible score in both categories, falling from a five to a one. A mother who has two children in the district said she wishes teachers would spend more time with students individually. “Yes I really do hope something changes. I have a child that’s ADHD and she has problems with her learning,” parent Natalie Harbison said. Wall believes parents have to work closely with their kids at home too. “We have to get involved in our children’s education to make a difference it’s very important,” Wall said. Wall said he hopes the board begins immediately on ways to improve. We reached out to Superintendent Verna Ruffin and all school board members for comment, but none were willing to comment Thursday night. You can read the full TDOE report here: http://www.tn.gov/education/data/report_card/index.shtml.