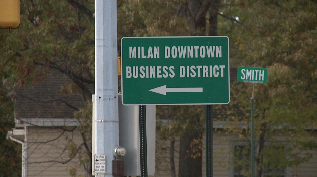 MILAN, Tenn. — Some residents in Milan said they want to see more people in and out of their city. Voters, like Bruce Lifsey, said allowing alcohol could give the economy the boost it needs. “I think it’ll bring in more sales and that just means more tax dollars,” Lifsey said. Lifsey explained he plans to vote in favor of the on-premise alcohol sales Tuesday. If the majority of voters choose it, bars and big restaurants could move into the city. Not all voters plan to check the same box on the ballot. David McCall thinks alcohol could end up in the wrong hands. “When little kids see their parents drink, then that’s gonna make them want to drink too,” McCall said. He said his friend was killed while driving drunk years ago and ever since, he has been against drinking. “I had to go to his funeral and it was bad,” McCall said, “they wouldn’t open the casket.” Milan Mayor Chris Crider said he think alcohol will bring in business. “I’ve been contacted by representatives of O’Charley’s, Bennigan’s and Chili’s. I’m hopeful one will come, but none will come if this does not pass. I’m ready to tear into a big steak in Milan, not Jackson. I’m ready to see Milanites eat here, not there, where the food and drink sales tax dollars educate their kids and pave their streets,” Crider said. Lifsey agrees with Mayor Crider. “I’m all for it. I think it’d bring in tax revenue, I mean they need it,” he said. McCall said he thinks the cost of a life is worth more than bringing in revenue. “It’s wrong, I mean kids gonna be buying it every day,” he said. Off-premise alcohol consumption, like liquor stores, is not on the ballot in Milan.