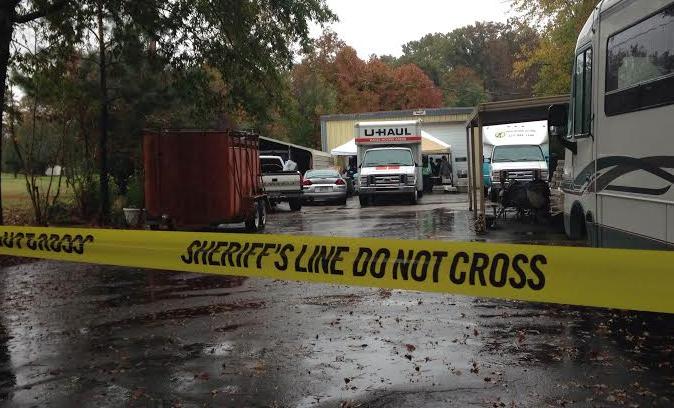 GIBSON COUNTY, Tenn. — Deputies have raided what they believe to be a puppy mill in Humboldt, according to Gibson County Sheriff Paul Thomas. “There’s no regard for the animal welfare at all,” Thomas said. The sheriff said about 100 dogs have been found inside a storage facility located on the property of a home in the 200 block of Pleasant Hill Road in Humboldt. He said the dogs are of different breeds including Yorkies, Chihuahuas and Boston Terriers. All the dogs in the storage facility are believed to be raised for profit, Thomas said. High levels of ammonia caused by feces and urine have been detected in the air and have caused eye damage in some of the dogs, according to Michael Cunningham, public information officer with Animal Rescue Corps — a group that was part of the initial investigation. Thomas says the investigation began with someone interested in purchasing a puppy from the property. “They thought it was poor conditions and the dogs weren’t living like they should, so they notified the rescue group,” Thomas said. Officials with the nonprofit Animal Rescue Corp say they sent in an undercover investigator. “We got the footage needed, put together a case file,” said Scotlund Haisley, president of Animal Rescue Corps. “Our veterinarians reviewed the documentation. We reviewed all the violations.” Haisley says that is when they turned to the Gibson County Sheriff’s Department. Some of the dogs also have poor dental health and signs of parasites, according to Haisley. “Everything we’re finding is common in a puppy mill,” Haisley said. “Eye issues, feet issues from laying in their own urine for long periods of time. Teeth — really horrible teeth. They’ve been fed a horrible diet.” Neighbors said they knew the home owner had several dogs, but they were not aware of the horrific conditions. “We hear them all through the night, all day and all night long,” said Robert Solberg, who lived across the street. “It’s kinda miserable hearing them dogs all the time.” No charges have been filed at this time. Sheriff Thomas says they did have at least one person in custody they were questioning. He says if charges are filed there could be separate counts for each dog. The dogs are going to be in a rehabilitation facility in Lebanon set up by Animal Rescue Corp. “We’re going to do everything we can to save 100 percent of the charges we’ve got in here,” Haisley said. Once the animals are well enough for adoption, they will be put into various animal shelters across the region. Cunningham, the public information officer with Animal Rescue Corps, says the group signs a contract with the shelters prohibiting them from killing any of the rescued animals with euthanasia. Stay with WBBJ 7 Eyewitness News for more on this developing story.