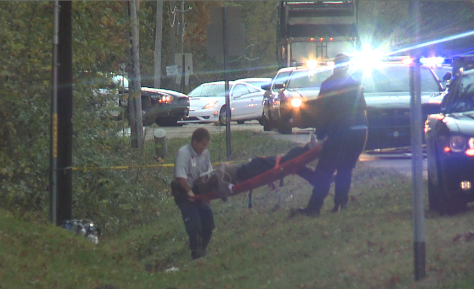 JACKSON, Tenn.- One person is dead after an officer involved shooting late Thursday afternoon. Police responded an incident where a suspect was shot and an officer was stabbed, according to Interim Police Chief Julian Wiser. “Police responded to the 1100 block of Timberlake Estates in reference to a disturbance call, a police officer was stabbed at this location and a suspect was shot and that’s pretty much all I can advice you at this time, Chief Wiser said on the scene. Chief Wiser said around 4:36 p.m. Thursday, officers were called to an area near the entrance to Timberlake Estates on North Parkway to investigate a man causing a disturbance. Chief Wiser said the unnamed officer spotted a man matching their suspect along North Parkway and got out of his patrol car to talk to him. That is when investigators said the man attacked him with a knife, stabbing the officer who used deadly force to stop the attack. Investigators said ambulance crews transported the injured man and the officer to Jackson-Madison County General Hospital. The suspect was pronounced dead at the emergency room. The officer was treated and later released. A woman who lives in Timberlake Estates said she was surprised, but does not feel unsafe. “You’re always surprised when something like that comes close to home even in your own town that’s supposed to happen off somewhere else,” Dolores Moore said. Moore was home during the incident, but said she did not see what happened. “I didn’t hear a thing in the world until we left about a quarter til 6 to go to dinner and all the policemen were out there,” Moore said. Part of North Parkway was closed to traffic for about an hour as police investigated. The officer was treated and released from a local hospital. His name is not being released. Jackson Police are also not identifying the man who was fatally wounded.