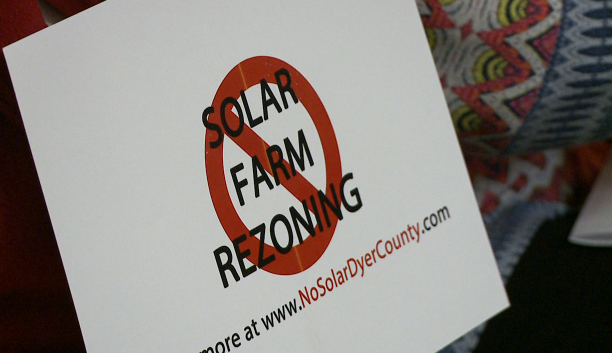 DYERSBURG, Tenn. — The proposed solar farm in Dyer County was voted down Monday night. Residents did not hide their enthusiasm after the measure failed, applauding the decision. It was a heavily debated resolution that ended with a vote of 12 -8. The director of the company working to build the farm said this would have created up to 200 jobs during construction, which would have began in 2016. Residents who live near the proposed location had conflicting opinions. “Being a teacher, I teach our children every day that we have to start conserving electricity and finding renewable energy sources, and because we’re using so many of our natural resources, so this is a great thing for the county,” said Andrea Bennett Black who wanted the resolution to pass. Other residents were not as welcoming. “There’s people that have bought homes — built homes — that have spent their life savings, and now to move a solar farm 20 feet across the road from them — that’s just not right,” said David Craig who was against the solar farm. The solar company said it still hopes to work with Dyer County to build a solar farm in the future.