Police: Brownsville shootings may be connected 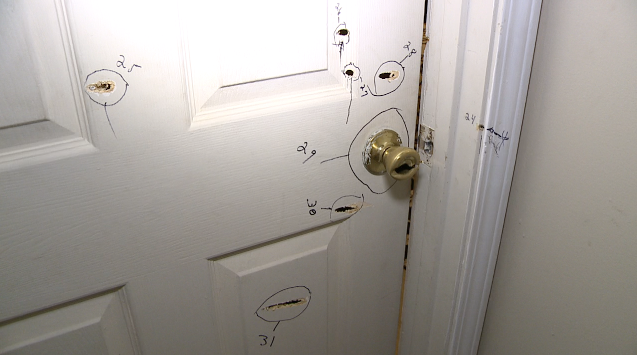 BROWNSVILLE, Tenn. — Officers are now saying three of the four shootings that happened early Sunday morning in Brownsville are being investigated as if they are connected. “We’re investigating those three crimes together as a whole,” Brownsville Police Captain Chuck Willis said Monday. “We really think the first — the homicide — and those two are connected. I can’t go into a lot of detail, but we feel like they’re connected.” Willis went on to say it is too soon to say if gangs could be behind this rash of violence. Just after midnight Sunday, the Brownsville Police Department said Tereon Taylor, 23, died after being shot on East Cherry Street. A few hours later, officers responded to two separate calls. The first was on North Park Avenue, where a vehicle had been struck by three rounds. Nobody was injured. The other was in response to a home invasion where they estimate about 20 rounds were fired into the home. Darious Currie, 19, was in the home at the time of the intrusion. Authorities say he broke a window in the back of the house and fled. Residents told WBBJ 7 Eyewitness News that this much violence makes them uneasy. “Why should we have to be shot in the head or shot in the car or shooting in our house and stuff,” Sandra Jones said. “It makes you feel insecure around here,” Carolyn Fraser said. “Every time you turn on the news, all you hear is shooting, shooting, shooting.” Nora Whitman said it worries her for her children’s sake. “It makes you want to keep your door locked and keep your kids inside,” Whitman said. Anyone with information about any of the shootings is asked to contact the Brownsville Police Department at 731-772-1260 or Brownsville Haywood Crime Stoppers at 731-772-CASH (2274).