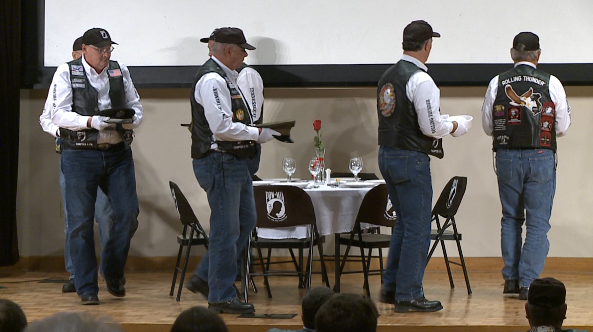 MARTIN, Tenn. — Veterans, prisoners of war and those still missing in action were honored Tuesday at the University of Tennessee at Martin. The Veterans Day ceremony was put on by the school’s Skyhawk Veterans Association and the Rolling Thunder. The northwest Tennessee chapter of the Rolling Thunder performed the missing man ceremony to honor those who have not returned from service. 83,000 is the number of prisoners of war and missing in action service members dating back to World War II. “That’s 83,000 families that have no clue where there loved ones are at they can’t have a closure they have no one to bury,” Randy Edwards from the Rolling Thunder said. Edwards said the group serves to educate the public that there are still that many members missing. He said he has performed the ceremony hundreds of times and still gets emotional. The table is set for six representing Americans missing from the Army, Marine Corps, Navy, Air Force, Coast Guard and civilians. A sergeant from UT Martin’s Skyhawk Veteran Association experienced the ceremony for the first time this Veterans Day. “I had to wipe tears off my eyes when I was through. I don’t know it’s just, it was emotional,” Sergeant first class John Nanney said. A cadet from the school’s ROTC program said Tuesday was inspirational. “It was good to see some of these members here today and see how much this means to them even though they’ve ended their career 20, 30 years past they’re still very passionate about what they do,” Cadet Dustin Hopper said. Edwards said performing the ceremony is an honor and the Rolling Thunder performs it throughout the year free of charge. “If you take every man, woman and child in Jackson, Tennessee and have no clue where they’re at and no way to have closure on that that’s the impact you gotta think about,” Edwards said. UT Martin was the Rolling Thunder’s third stop on Veterans Day also performing another ceremony in Martin and one in Kentucky. Edwards said the group is made up of 60 percent of veterans.