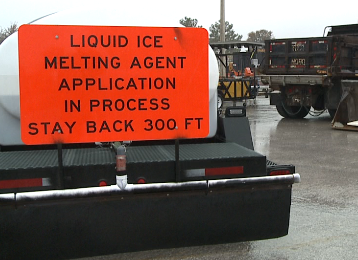 MADISON COUNTY, Tenn. — Tennessee Department of Transportation crews spent hours Thursday and Friday prepping roads for winter weather. Sunday’s rain washed much of the salt away, but TDOT plans to keep treating roads and is urging drivers to take caution during Monday’s commute. With a wintry mix on the way early Monday morning, TDOT plans to have their trucks loaded and up to 300 employees out monitoring the roads. Many West Tennessee drivers said they are worried about the winter weather. “I guess just maybe the bridges and stuff like that if some of the back roads are icy — that’s usually where it gets bad,” Jackson resident Jonathan Vailes said. TDOT spokesperson Nichole Lawrence said their crews will begin monitoring bridges and overpasses starting after midnight Sunday. TDOT is reminding drivers to leave crews plenty of space when they are out working on the roads. Lawrence said in addition to observing bridges, crews will be monitoring roads for freezing and will add additional salt and brine as needed. Many West Tennessee drivers agreed Friday was too early to begin prep but said their main concern is other drivers. “That’s usually the biggest concern is other people instead of the roads itself,” Jackson resident Wendy Hopper said. “If they are just careful, it won’t be a problem.” “I just want to leave a little early tomorrow, drive a little slower, be a little more aware,” Barry Helveston said. TDOT officials said they have trucks with plows ready to go in case of snow accumulation.