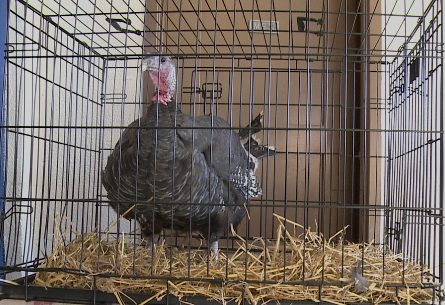 JACKSON, Tenn. — A West Tennessee turkey will live this Thanksgiving. Jackson Mayor Jerry Gist pardoned one lucky bird Wednesday in front of hundreds of young students. Old Hickory is a 2-year-old, 42 lb. heritage turkey with some very good luck. “She loves children, loves to be petted, loves to eat,” Valerie Malone said. Malone brought up Old Hickory on a farm in Madison County. “She lost her mate about six months ago, so she’s kind of been an outcast,” she said. Gist pardoned the animal in front of hundreds of students at Washington-Douglas Head Start. “Many of her friends might be on the tables of many families throughout Jackson,” Center Coordinator Jamie Elliott said. “She will be given a second chance.” Elliott said they are teaching students how to be thankful and how to give. “I think that we’re all entitled to a second chance,” he said. Malone said it is great to see city kids get a taste of farm life. “There are lots of turkeys out there that feed us on Thanksgiving and Christmas, so we have to appreciate them, and it’s good for the kids to know where that comes from,” she said. Old Hickory will spend the rest of her days at the Tennessee Safari Park in Alamo.