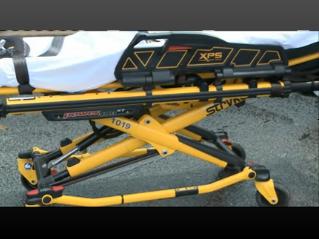 JACKSON, Tenn. — Firefighters and EMTs are working together to serve West Tennessee’s changing population. Obesity has become a big problem in the area, and first responders have seen an increase in calls because of it. “I’ve transported people weighing 400 pounds, 500 pounds, even 600 pounds on a daily basis,” Paul Spencer with Medical Center EMS said. Shocking weights West Tennessee EMTs said they encounter on a regular basis. But they can not lift them alone. The same men and women who answer fire calls are the muscle behind calls known as “man power assists.” “We respond to usually four to five a week like that,” Gibson County Fire Chief Bryan Cathey said. “We go out and help them when they have a very large patient, to assist them with lifting.” The lifting assistance may be needed after a patient falls or is unable to physically move on their own or is too heavy for two EMTs to lift onto a gurney. “You have to get the first responders, EMTs and paramedics around the stretcher to take the weight off of everybody,” Cathey said. “It’s just a lot easier, a lot safer, and we try to avoid back injuries that way.” They also have heavy duty equipment on their side. “We have stretchers that have a limit of over 1,000 pounds,” Spencer said. “But we haven’t had to use one of those in quite a while.” Most stretchers can hold upwards of 700 pounds. They also use hydraulics to help the paramedics, but it still takes more than two people to lift. According to the Centers for Disease Control, Tennessee’s obesity rate currently stands at just under 34 percent of adults, the fourth highest in the country, which medical professionals say is shocking. “It’s going to have a tremendous impact on our health care system,” said Fred Sesti, a nurse practitioner with Regional Medical Associates. “We need to do something to prevent it here in West Tennessee.” That is why Sesti is committed to encouraging his patients to face this difficult battle. “The hardest part is getting to that point and starting an exercise program,” Sesti said. “Finding a dietitian and working with your health care provider.” Obesity is not just taking a toll on the individual. First responders said it is putting pressure on the community as well. “It does take a toll, because we are working five to seven of those a week,” Cathey said. “It makes a difference, and it ties up our resources.” Cathey said resources are already slim because, like Gibson County, many West Tennessee counties rely on volunteers to provide these essential services. “Any time they make a call, whether it be fire, medical or rescue, it’s costing them money, fuel and time away from their job,” Cathey said. “The way they get paid is when someone says ‘thank you.'” Since 2000, Tennessee’s obesity rate has increased 14 percent, which medical professionals said has increased the population’s risk for diabetes and heart disease.