Jackson couple says they aren’t at fault in shooting 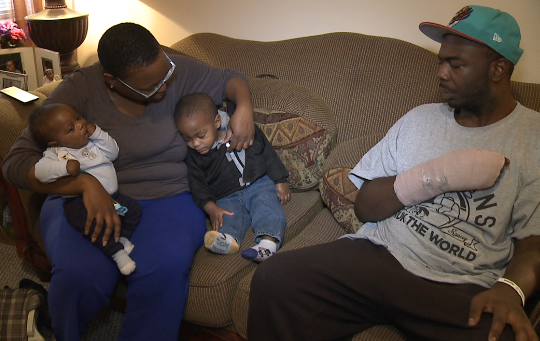 JACKSON, Tenn. — A couple involved in a shooting at a Jackson gas station said their story is different from the police report. Jackson Police officials said Wednesday two women were arguing over a man, when Erika Glenn stuck the other woman with her car. The woman’s boyfriend, Antwan Norman, then reportedly shot at the car in what police said was self defense. However, Norman is a convicted felon, and was charged with unlawful possession of a firearm. Glenn said the reason she stepped on the gas was to escape Norman after seeing the gun. “This fight was not over a man. I’m leaving this man. I’m divorcing this man,” Glenn said. Glenn’s boyfriend, Amillio McKnuckles, was in the passenger side of the car, and was shot in the hand. He said his 2-month-old, a five-year-old, and the shooter’s own son was in the car at the time of the shooting. He said more charges need to be made. “I got shot in the midst of it, I was on that side,” McKnuckles said. “If he was aiming to shoot her, she was driving the car. So, if it was self-defense he should have been aiming at her not the side me and the kids were on.” The couple said they are being threatened by local gangs after the shooting and that they are contacting lawyers to proceed with legal action.