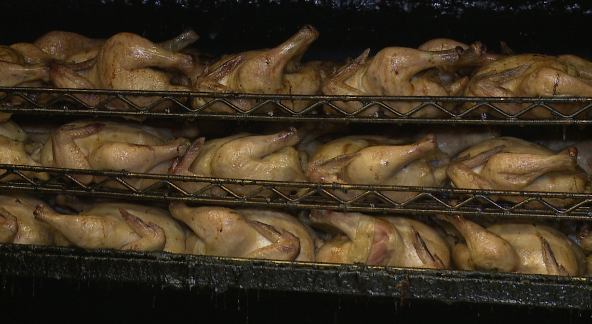 JACKSON, Tenn. — Not everyone wants to cook for Thanksgiving, and some Jackson restaurants say the holiday brings in big business. Staff prepare Thanksgiving meals at Say Grace in North Jackson, including everything from green beans to mashed potatoes and dressing. “The food just made from scratch, homemade like my grandma taught me how to cook, the way things used to be,” Say Grace Managing Partner Rachel O‘Donnell said. Instead of cooking, O‘Donnell said dozens of customers opt to order out. “It provides the opportunity to have time with family versus time in the kitchen then time cleaning up,” she said. Reggie‘s BBQ & Wings in Jackson said it plans to prepare about 300 turkeys. Manager-Owner Eugene Pickett said they will work through the night to have the birds ready for Thursday. “We make a special seasoning that we use on the turkey and also inject the turkeys to deep fry,” Pickett said. Pickett said Thanksgiving and Christmas is their busiest time of the year. “Well, it means that I’ll be able to make payroll next month for one thing,” he said. O‘Donnell said Say Grace is open on Thanksgiving and already booked with reservations until 1:45 p.m. that day. “I was really shocked at the turnout,” O‘Donnell said. Customers can contact Say Grace at 731-664-3227 and Reggie‘s BBQ & Wings at 731-660-8600.