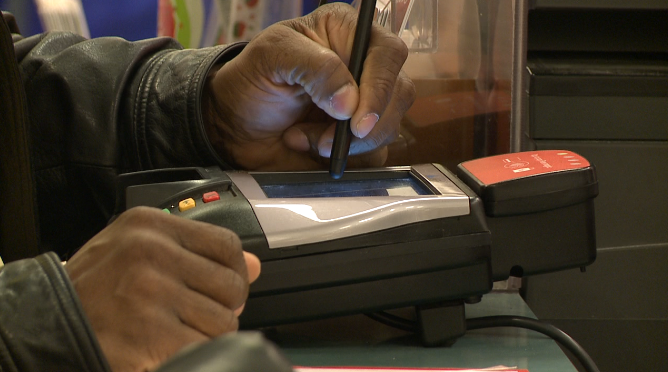 JACKSON, Tenn. — The holiday shopping season officially begins on Thanksgiving Day, with “Gray Thursday” one day ahead of traditional Black Friday. Many West Tennesseans stood in line Thursday in hopes of getting the best deal. Some say “Gray Thursday” is the new Black Friday since it allows them to start shopping for bargains a day early. Big retailers, such as Macy’s, say it’s something their customers have asked for. “Our customers have been telling us this for years, that they want to come out and shop with us earlier and earlier every year,” Vice President and Store Manager of Macy’s in Jackson, Andre Jones, told WBBJ Thursday. “So we’re meeting those wishes, plus the wishes of everyone else.” Macy’s opened at six o’clock Thursday evening, and store officials say the numbers support their early start. “About 44.8 million customers shopped with us last year in 2013, that’s basically a 27% increase from 2012,” Jones said. “So we have a huge following of customers willing to get into the stores and shop with us during our Black Friday.” But some customers say Thanksgiving should be for family, not shopping. “It’s really not allowing people that are wanting to get something on Black Friday to be with their families on Thanksgiving,” Alexander Gilana said. “I hate it, and I hate that they’re doing it to the families,” Murla Rogers said while waiting in line at Target. “I need to be at home eating turkey now, but I had to come get the sale for my daughter.”