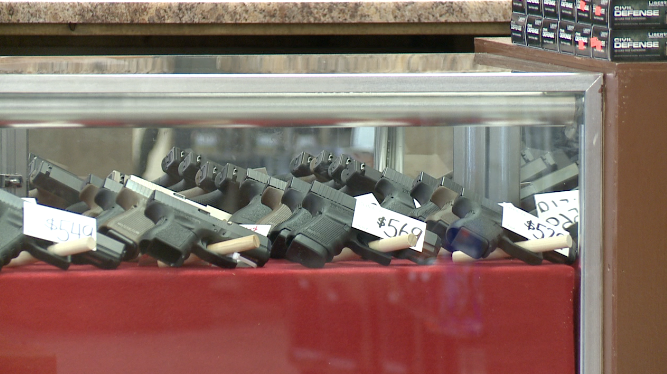 JACKSON, Tenn. — With Black Friday upon us, people are buying plenty of gifts. Everything from electronics to clothes, even guns. But if you’re buying guns as gifts, know it’s not as simple as picking one out and paying for it. “You’ll need a valid state ID with the correct address on it,” said Brett Krasner, owner of Krasner Pawn. “You’ll also have to fill out a form and be approved by the TBI and FBI background checks.” But that’s just if you’re buying it for yourself. According to Krasner, federal law prohibits any gun dealer from selling a firearm that’s going to be given away. “The person that the gift is actually for would have to come in to pick their own gun up,” Krasner said. “If it’s for them, it has to be picked up by them and be approved for them.” Anyone under the age of 21 can’t purchase a gun in the state of Tennessee. But Robert Collins recently bought a gun for his 11-year-old son and says he didn’t have a problem. “It’s pretty easy,” Collins said. “My son, it was a gift for him and it was a hunting rifle.” Krasner says as long as you’re safe, buying for a child isn’t a problem. “For a child, you can buy them a gun, take them hunting and I’m sure it wouldn’t be a problem,” Krasner said. “Buying a gun for someone who’s not eligible — that’s a problem.” By not eligible he means someone with a criminal record or who is prohibited by law from having one. Overall, gun owners say the rules are in place to keep the public safe. “Just keeping the guns in the hands of the people who should have them and out of the hands of the people who shouldn’t,” Collins said. “That’s the main thing.” If you do end up buying a gun this Christmas, experts say to add in a safety course to make sure you’re up to date on current laws.