Operation Home the Hounds in need of donations 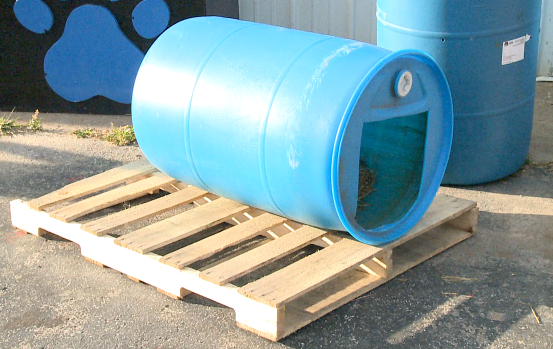 MADISON COUNTY, Tenn. — Beyond Bars Animal Rescue is on a mission to house outdoor dogs whose owners can’t afford to purchase dog houses. “We can save dogs all day long, everyday and unless we’re doing something to help the community and help pet owners retain ownership of their animals, we’re never gonna make a difference,” Whitney Owen, President of Beyond Bars Animal Rescue said. There are more than 164 million pets in the U.S. and costs can get expensive. “I work for animal control in Jackson so I come in contact with a lot of animals in need. A lot of owners are really trying but just don’t have the resources in today’s economy,” Owen Said. BBAR said they get a lot of donations and they don’t always know what to do with them, which is how they are able to make the free dog houses as part of Operation Home The Hounds. Using pallets and plastic barrels bolted together, “On the inside, they’re bolted together to make sure it’s sturdy enough to not roll off,” Nathan Fuchs, BBAR shelter manager said. Fuchs said the houses take less than a minute to put together and can be used year round. “There’s no maintenance involved whatsoever. We actually make sure there are drainage wholes in the bottom just in case,” Fuchs said. The organization said the supplies can’t keep up with the demand. While they have a few hundred pallets on standby, they do not have enough barrels. “We are completely out of barrels. Until we have some more come in, there’s not much we can do,” Owen said. BBAR runs entirely on donations. Owen says each barrel cost about ten dollars to buy. The non profit says that money could go toward other needs for the shelter. “Until people can donate them, we’re pretty much at a standstill,” Owen said. Donations to BBAR are tax deductible. The shelter is located at 314 US Hwy 45 West.