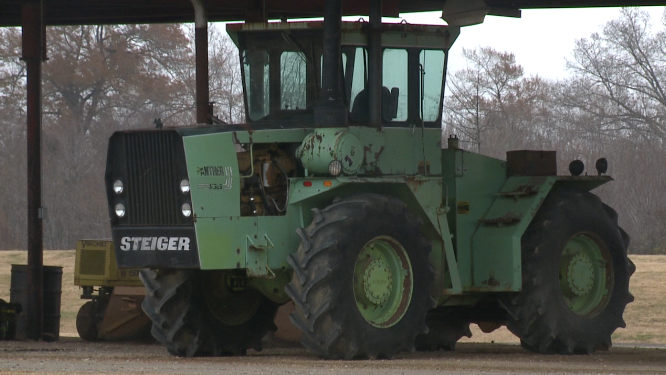 GIBSON COUNTY, Tenn. — The Gibson County Sheriff’s Department say they chased a tractor through the city of Dyer damaging yards, fields and even a patrol car. Gibson County deputies said a farm tractor was stolen early Monday morning by Christian Estes, 19. He is accused of being behind the wheel for miles, often driving recklessly and raising a shotgun in the air when a deputy would get close. “He refused to stop and just led them on a chase around the Dyer community in the city limits and ultimately ended outside the city limits,” Sheriff Paul Thomas said. “He ran through some fields, some yards, some houses there in Dyer — even some Christmas decorations,” Thomas said. “He did damage to the driver’s side of one of our police cruisers.” Authorities say after chasing Estes through a field, he finally got back on the road after driving through someone’s backyard. Thomas said that is when they caught up with him. “When we got him out of the car, one of the officers asked him ‘why did you have the shotgun?’ He said, ‘It’s mine. I was just carrying it with me,'” Thomas said. Authorities say they stopped Estes off Keely Mill Road, where he threw the shotgun out the window and surrendered. Deputies do not suspect he was under the influence of drugs or alcohol. It remains unclear why Estes stole the tractor. “On the scene he said he was trying to get to Tiptonville. When we said why, he just said, ‘I’m trying to get to Tiptonville,'” Thomas said. Estes faces six counts including aggravated assault on a police officer and having a weapon as a convicted felon. Deputies say this is not Estes’ first run-in with the law. In March of this year, he was charged with aggravated assault with a deadly weapon. His bond has not been set.