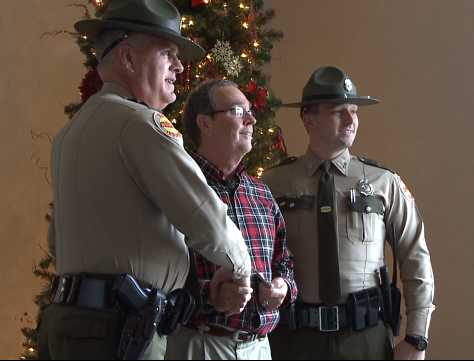 SELMER, Tenn. — You’ve heard the saying, ‘To give is better than to receive,’ and that’s exactly what a local man lives by. A McNairy County resident has been raising money to help kids in need buy Christmas presents for more than three decades. Sunday he was recognized by the Tennessee Highway Patrol. Jack Cheshier has helped nearly 10,000 kids have a brighter Christmas. “It’s a tradition of my family as much as Christmas morning because I’ve been doing it 32 years,” Cheshier said. Cheshier began independently running the children’s shopping spree in McNairy County in 1982 and said when the project began, the budget was $350. Now it’s around $20,000. “I’ve never ever not had enough money. I’ve always had enough money to take care of the children,” Cheshier said. This year, Cheshier is getting a little help from the Tennessee State Troopers Association. Each district of the THP was given $400 to award to the person or charity of its choice. District 8 chose Cheshier and the children’s shopping spree. “It’s just a small thing we can do to show that we are out there as part of the community. We’re not going to change the world, but if we can change a life or two on Christmas morning, it’s a good day,” Lieutenant Brad Wilbanks said. Cheshier talks with teachers and guidance counselors at each McNairy County elementary school. “…anyone you have here that you feel like is not going to have a good Christmas,” Cheshier said to the schools, “this year we want them to be part of our project.” National Honor Society students from McNairy Central shop one on one with the kids ranging from kindergarten through fourth grade. “We always stress you gotta buy one thing for yourself, because you’d be shocked that these kids want to buy for family members or friends. They don’t want to spend for themselves that’s how sweet they are,” Cheshier said. John Chandler was a recipient 25 years ago “Our family worked hard, but they didn’t have a lot of money,” Chandler said. Chandler explained this project has come full circle and it means more than just presents. “I transitioned from being helped and now I get to help other people, and so I believe it made a huge impact,” Chandler said. This will be Chandler’s third year volunteering. Cheshier said he can’t thank people enough for their donations and said he’s grateful for the THP’s $400 award. “I think it’s very amazing that they’re willing to donate to my project and it just thrills my heart and I’m so proud,” Cheshier said. The shopping spree is scheduled for December 15 and around 300 kids will participate.