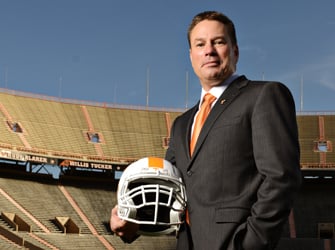 KNOXVILLE, Tenn. (AP) – Tennessee is giving football coach Butch Jones a two-year contract extension and a raise that will pay him $3.6 million a season.

His contract will run through the 2020 season, and the raise takes effect in 2015. Under his original deal, Jones had been making $2.95 million a year.

Athletic director Dave Hart said Monday the school has the “right man leading our football program.” He called Jones an “outstanding ambassador” for the university and noted how Jones had energized Tennessee’s fan base.

Jones has an 11-13 record in two seasons at Tennessee and has dramatically improved the Vols’ recruiting.

Tennessee (6-6) will make its first bowl appearance since 2010 when it faces Iowa (7-5) in the TaxSlayer Bowl on Jan. 2 at Jacksonville, Florida.