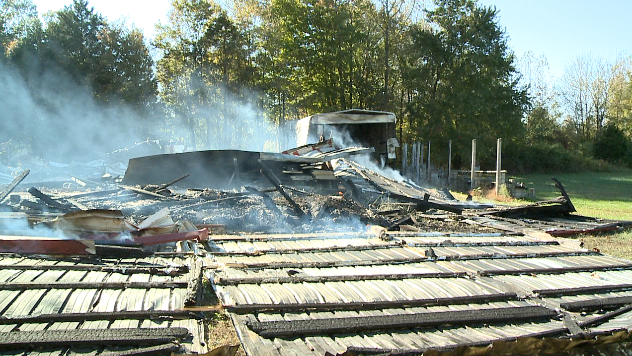 CARROLL COUNTY, Tenn. — State authorities say they have charged a Carroll County minor with three counts of arson, including a fire that destroyed the Vale Fire Department. In a statement Monday, the Tennessee Department of Commerce and Insurance said the following: “At the conclusion of an investigation by Bomb and Arson Section agents with the Tennessee Department of Commerce and Insurance‘s Fire Prevention Division, a suspect has been charged with three (3) counts of arson, including a fire on Sept. 3 at the Whistle Stop CafÃ© (on Broad Street in Hollow Rock), a fire at a residence on Sept. 15 and a fire at the Vale Fire Department (Highway 114 North) on Oct. 20. The suspect charged in the case is a juvenile from Carroll County, and his name cannot be released to the media.” Those who live in the area say it is a fire they will never forget.. “I heard a loud explosion that shook the windows,” said Betty Foster, who lives less than a mile from where the Vale Fire Department once stood. “It was really scary,” Foster said. “So I went down the road and saw that it was the fire department.” The only thing remaining from the Vale Fire Department is the slab and some debris. Residents close by say they are glad they are getting some closure. “Well, I hope that they can get it back,” Foster said. “It’s very scary to think that somebody that and would actually do something like that.”