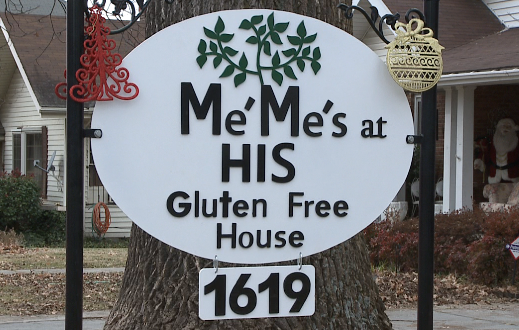 HUMBOLDT, Tenn. — One local bakery became a first in West Tennessee Sunday to cater specifically to the gluten-free eater. For some it’s a fad diet, but for a growing number of Americans, going gluten free is a necessity due to a diagnosis of Celiac Disease or a gluten intolerance. Me Me’s Yum Yums in Humboldt held its grand opening Sunday afternoon. Owner Peggy Creasy has been experimenting with gluten free baking since her grandson was diagnosed with Celiac Disease. Celiac Disease is an autoimmune disorder which makes it dangerous to eat gluten. “To be able to provide him some normalcy, it’s a great feeling,” Creasy said. Gluten in a protein found in wheat and grains that gives elasticity to dough and helps it rise. “Whenever we would come up with a good recipe he would say oh me me that’s a yum yum, and that’s kind of how the name ‘Me Me’s Yum Yum’s came to be,” Creasy said. One of Creasy’s customers said she was diagnosed with a gluten intolerance eight years ago. “It was quite hard, I mean basically I gave up everything. I gave up bread, I gave up cakes, I gave up everything,” Bonnie Huddleston said. Huddleston said she’s happy to have a place in West Tennessee where she can buy ready-to-eat foods. “I love carrot cake and she made me a carrot cake. It was the first time I had carrot cake in like seven years.” Creasy said she gets requests multiple times a day for different items. “My gold standard that I know I’ve got a good product is that if somebody who doesn’t have to eat it wants to eat it,” Creasy said. Creasy, who is also a registered nurse, said the bakery allows her to serve as a teacher and a baker. “This kind of allows me to do the two things that I love, which is cooking and medicine,so we try and help and educate every customer who comes in and has a question.” Creasy explained. Prior to the bakery’s grand opening, Creasy has been selling her baked goods at the farmers market in Downtown Jackson. She said she plans to open a small gluten free restaurant next year.