Marine veteran recognized in Hardin County for Medal of Honor 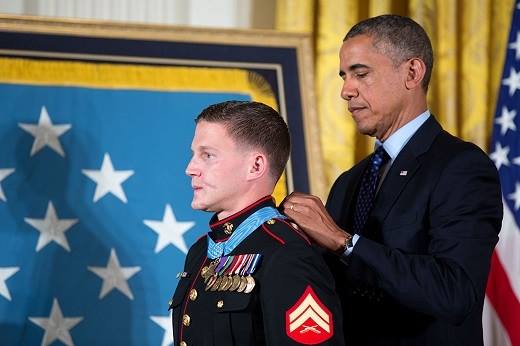 SAVANNAH, Tenn. — A West Tennessee soldier is honored, awarded for his sacrifice serving for the United States Marine Corps. A crowd gathered outside the Hardin County Courthouse Saturday to show support for Lance Corporal William Kyle Carpenter, one of only three in Hardin County to have ever been given the Medal of Honor. The Medal of Honor is the United States of America’s highest military honor. Governor Bill Haslam named December 20, 2014 Corporal William Kyle Carpenter Day in Tennessee. “When the pressure was on, something instantly had to be done. Kyle Carpenter showed what he was made of,” Carpenter’s mentor Bill Kennedy said, who spoke at Saturday’s event. Carpenter fought for the Marine Corps in ‘Operation Enduring Freedom’ during his Afghanistan tour. Reports said he shielded a grenade from his fellow marine, causing him to lose his right eye and most of his teeth. The blast even caused him to break his jaw, and his arm in several places. “Some have said he was awarded it, but I”m here to tell you today he wasn’t awarded it, he earned it,” Kennedy said. President Obama honored Carpenter with the Medal of Honor in June of this year. The now veteran, Carpenter, explained the reason soldiers risk their lives for the United States. “Free streets, to say the pledge of allegiance, to say a prayer – a lot of people around the world don’t get that. They can’t really fathom what it is to live in a free country or town, or live on free streets,” Carpenter explained. Carpenter said this medal doesn’t just represent him either. “A lot of nations look to us as a shining example of freedom, hope, and democracy. So I wear it for that. I wear it for all of you. I wear it for our future generations,” Carpenter told the audience. Carpenter retired from the Marine Corps July 2013 after serving since November 2010. Since receiving the honor, Carpenter attends school at the University of South Carolina in Columbia.