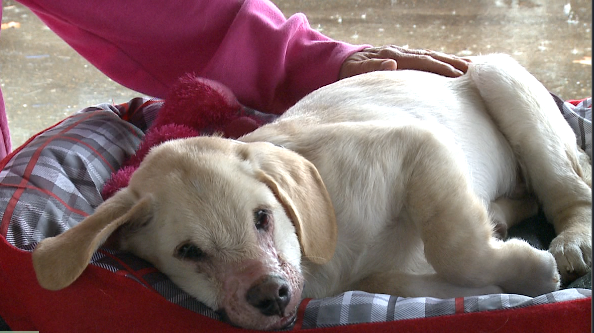 SELMER, Tenn. — The story of an abused West Tennessee puppy has gone viral across the world after he was picked up by a foster rescue. Chip, a 12-week-old lab, met Julie Marecki just days before Christmas. Since then, Chip has become an Internet sensation and now is receiving phone calls to adopt him from all over the world. “The support has been incredible,” Chip’s foster mom, Julie Marecki, said. “No dog deserves to be treated like this.” Marecki is one of a few volunteers for a rescue organization known as HARTT. Chip was picked up by Marecki after a concerned resident in Reagan, Tenn., told her two dogs had wandered onto their porch. “When I picked them up, I had seen pictures the folks sent me, but I didn’t expect for it to be that bad,” Marecki said. Marecki took Chip to the vet a day after she picked him up and says the vet told her it was the worse she had ever seen. She says the vet thinks the dog may have had flammable liquid poured on his face and struck with an object causing trauma to his head. The rescue organization says they have filed a report with the McNairy County Sheriff’s Department. The department was unable to be reached to comment on the investigation. “I hope they catch this person, because who knows what could happen next,” Marecki said. “They did this horrible act to an animal — what will they do next?” To learn more about the HARTT organization, visit www.harttrescue.org.