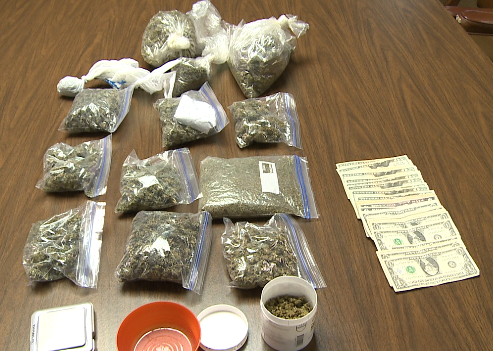 HUNTINGDON, Tenn — Huntingdon police said they arrested four people Sunday after finding upwards of $8,000 worth of marijuana in their apartment. Officer Chris Cole told WBBJ7 Eyewitness News he found these bags of marijuana in home on East Main Street in Huntingdon. Authorities say Phillip Harris, Porshea Simmons, Roderick Reed and Ronnie Reed have are all charged with possession with intent to sell and possession of drug paraphernalia. Officer Cole said he noticed the smell of drugs after knocking on the door. “After obtaining the search warrant, we conducted the search and located large amount of marijuana and drug paraphernalia and some cash,” Officer Cole said. Authorities said they do not think the marijuana was being grown in the upstairs apartment of the house. Residents in the building said what police found was shocking. “I’m just glad it was discovered, because I guess I would say there were a lot of people at different times, but you never know when somebody might get into a fight or something could go on,” apartment resident, Connie Parnell said. As for where the marijuana came from… “They’re getting it from somewhere. That matter is still under investigation at this time,” Officer Cole said. “We’re going to be looking into that. obviously its coming from somewhere because they’re not growing it there.” According to the property’s manager, the building where the drugs were found is owned by Huntingdon Mayor Dale Kelley. The following is a statement from Mayor Kelly sent to WBBJ 7 Eyewitness News Monday: “I own several rental properties that are managed by a property manager. The property manager completes a background check on each tenant and monitors each property. All property tenants sign a rental agreement which states use or possession of illegal drugs in, upon or about the property constitute a violation of the rental agreement. When these unfortunate events occur the tenant is immediately evicted per the signed rental agreement. Having owned rental property since 1989 this is the first incident that has occurred. Huntingdon Police department does an excellent job of dismantling drug abuse. My fullest support of police officers being diligent enforcing the laws of our community when there is suspicious activity occurring.”