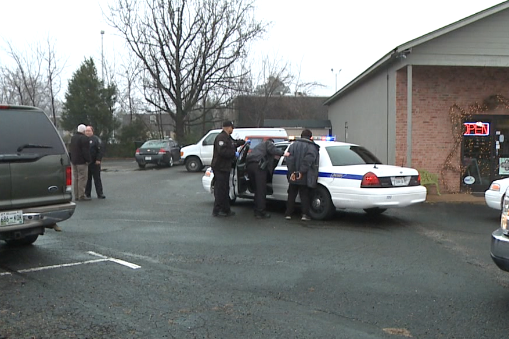 JACKSON, Tenn. — A Jackson business owner says police were called when a woman spotted a man trying to get into cars in a business parking lot. When authorities arrested the man, they found this was not simply a car break-in. “There was a girl at the bank across the street, and she saw a guy trying to get into our vehicles,” Sand’s Florist owner Jerri Sue Maxwell told WBBJ 7 Eyewitness News Monday. Maxwell said when officers arrived, they found the man in one of their delivery vans. “He is a homeless man that has been staying in the neighborhood, kind of a lot lately, and he was very intoxicated living in our van,” Maxwell said. Maxwell said knowing what she knows now is concerning. “It’s very uncomfortable,” Maxwell said. “I feel sorry for him because he doesn’t have a place to stay, and I don’t want any harm done to him. At the same time, I want myself and all our employees to be safe and feel comfortable.” Officers took the man into custody but did not release his name or the charges he faces. The business owners said Jackson police will now keep an eye on the area to keep something like this from happening again.