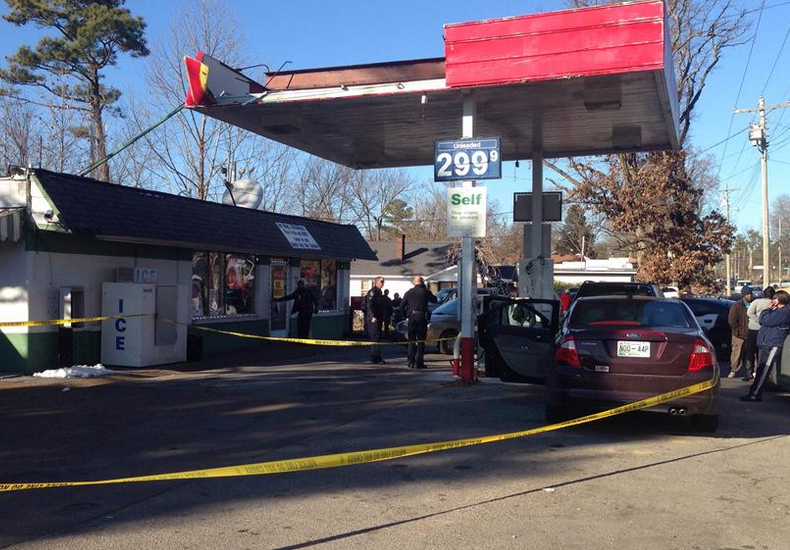 EAST JACKSON, Tenn. — The hunt intensifies for three men suspected in an afternoon armed robbery and shooting in East Jackson. Police say these are dangerous men who they want off the streets. Jackson Police say it all started just before 2:00 p.m. Friday afternoon at the Trinity Food Market on North Parkway When a man was robbed at gun-point while filling up with gas. The victim said, out of sheer instinct, he ran after one of the suspects. He says the gunman ran into the store then came out shooting. “I guess they were casing us,” Eddie Askew said. “They saw how much money we had and then they tried to rob us at the gas pump.” Askew says the suspects stole more than $30 after one of them stuck a gun to his side as he pumped gas. But he says he didn’t want them to get away. “I chased one of them from there to this store,” Askew said. “Then when he was boxed in the store he came out shooting.” According to Jackson Police, the shots rang out at Mr. Mart, shattering the window of this car and almost hitting the driver as she was getting out to get a cup of coffee. “She said she was exiting her car, the guy looked her in the face and started shooting,” the victim’s brother James Cole said. Investigators say the shooter, who’s described as a black man wearing all grey, ran into the woods behind the Mr. Mart heading towards Muse Park. While the other two suspects sped away in a grey Ford Mustang, which was later found abandoned less than a mile away. “We’re going to find them,” Askew said. “They’re going to get caught eventually. They’re defiantly going to get caught.” Although no one was hurt, the victims say the men responsible could have done a lot of damage. “He could have drastically changed someone’s life,” Cole said. “She’s a mother, she has kids and grand kids and she’ll probably be shaken from this for the rest of her life.” Jackson Police say they are still actively searching for the there suspects, using K-9 units as well as the police helicopter to comb the area. If you have any information about the shooting or if you’ve seen any of the suspects you’re urged to call Jackson Police or Crime Stoppers at (731) 424- TIPS (8477).