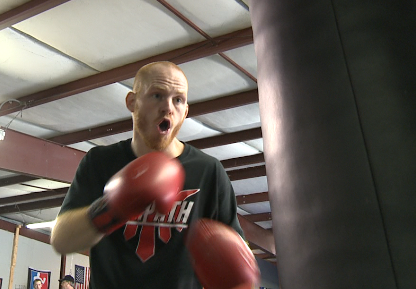 JACKSON, Tenn. — A local mixed martial arts fighter who recently turned pro is looking to continue his undefeated streak. Ryan Collins is a native of Jackson. Six years ago, he said he was sitting on his couch watching fighters on TV. He then said he joined a gym, and four months later was fighting as an amateur. “It’s not a good thing to go pro soon,” Collins said. “There isn’t any going back once you decide. You can’t go pro and be an amateur again.” Collins is currently undefeated as a pro. He submitted his first professional opponent in the first round via triangle choke. “When people watch my fights, it doesn’t matter if I win or I lose. I just want them to watch and be like, ‘man that was a great fight,'” Collins said. Collins said he has lived in Jackson his whole life. He said fighters who turn professional usually move on to bigger gyms, but he decided to stay home where his roots are. Collins said he trains six days a week, totaling to about 20 hours of gym time. He even takes his lunch break at the gym to get in some cardio. “I love to train. I love to fight,” Collins said. “I like doing this, and my family supports me so much.” Collins’ next fight will be Jan. 24 in Memphis. He will be fighting as a featherweight at 145 pounds.