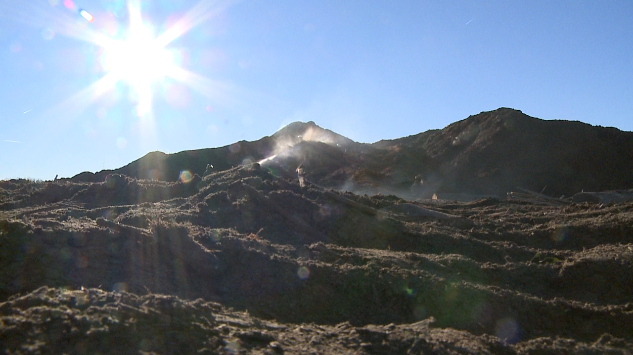 MADISON COUNTY, Tenn. — The winds blew, and smoke glided across a mountain of mulch after hours of fighting flames at Hooper Timber Company. It was the second time firefighters had responded to the property owned by Timmy Hooper. “We thought we had it down, and then this morning about 9 a.m. we got another call,” Hooper said. “Somebody passed by and saw flames, so I called them back out here and we’ve been fighting it ever since.” Hooper said heat from under the mound made its way to the surface, and flames ignited when it hit the air. Madison County Fire Chief Eric Turner said it wasn’t the only blaze first responders battled over the weekend. “Today’s been a pretty day. It’s windy, and we’ve had several calls throughout the county, people burning and it getting away from them,” Turner said. As the sunshine is expected to stick around for a few days, Turner says the high winds and low humidity can be a recipe for disaster. As Hooper’s property got back under control, fire officials said they’ll still be on guard, especially as people are attempting to burn away winter’s dead leaves and brush. Burning permits can be requested through your local fire department.