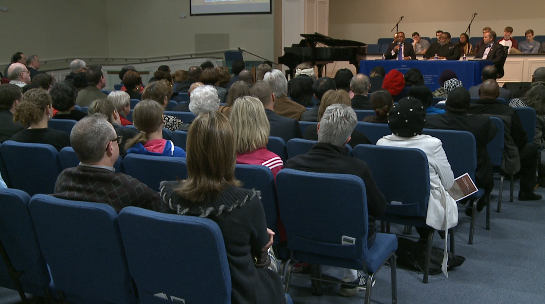 JACKSON, Tenn.-The presidents of Lane College and Union University unite to break down a barrier. Dr. Samuel “Dub” Oliver, president of Union University, and Dr. Logan Hampton, president of Lane College sat down in front of a packed house at Agape Christian Fellowship Church to talk about race and diversity. “I think there’s something inherent in the human spirit, I call that sin, that causes us to just look for that difference, to point it out, to try and take advantage of it,” Hampton said. Both hope this is one step closer to racial reconciliation. “Things that we’ve done wrong or things that we didn’t do that we should have done, sort of omissions that we’ve had,” Oliver said. Of the hundreds who attended, many believe this is continuation of Dr. Martin Luther King Junior’s legacy. “It shows that his efforts were not in vain and all of us are getting together as one and just having a conversation in the topics of diversity,” Tiffany Hogan, who attended the dialogue, said. Dr. Hampton admits discussing race is not easy. “Dr. King certainly struggled during his time to engage his conversation and we continue in his struggle,” he said. Both agree bridging the gap between east and north Jackson through their shared Christian values is what it will take for Dr. King’s dream to come true in the Hub City. “The best for Jackson and the best for the people of Jackson is for Lane and Union to flourish,” Oliver said. Hampton and Oliver said in the future expect to see more joint programs between their schools. The student populations reflect the diversity between the two schools. Lane College is a historically black college and university (HBCU) and is 99 percent African-American. Union is 64 percent Caucasian and 25 percent African-American. However, both schools were founded on Christian principles. Lane was founded by the Christian Methodist Episcopal Church and Union by the Southern Baptist Church.