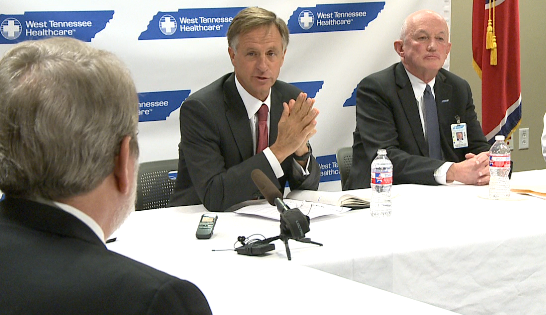 JACKSON, Tenn. — Governor Bill Haslam has laid out his plan for health care reform in Tennessee, beginning with a stop Wednesday in Jackson. The proposal could extend health insurance to more than 200,000 low-income residents. Haslam maintains the plan is not Obamacare and said he did not think Obamacare was right for the Volunteer State. “This is a critical issue to the state,” Haslam said. “We have a lot of people with no health care coverage, and we have a way to provide that at no cost to the taxpayers,” the governor said. Before the plan can go into effect, it needs support from both sides of the aisle in Nashville. The governor has called for a special session on the insurance alternative to begin Feb. 2. If passed, the program would come with two options — a voucher- or an incentive-based program. Haslam said the voucher-based Volunteer Tennessee program will allow employees to get onto the insurance provider sponsored by their employer. “In no circumstance would the cost of that voucher be greater than what it would cost to have a person on TennCare,” he said. Those choosing the Incentive Tennessee program will get credits similar to those currently in place by insurance companies. “If you went and got your annual physical and biometric testing, you would qualify for a credit,” Haslam said. If approved, Insure Tennessee will operate under a two-year pilot plan, funded entirely by federal money in the first two years. Some say they would rather offer an insurance option for two years than not at all. “I think this would leave Tennessee in a better place, even if it weren’t but for two years because during the two-year period think of the people who could control their health care,” Rep. Johnny Shaw, D-Bolivar, said. In the third year, the state could have to pick up at least 10 percent of the cost, according to Rep. Jimmy Eldridge, R-Jackson. An email from Haslam’s office says a commitment from the hospital industry for the possible future costs “will cover any additional cost to the state, and the program will automatically terminate in the event that either federal funding or support from the hospitals is modified in any way.” Some state representatives said they are unwilling to commit to fully supporting the proposal for now. “What happens if that 10 percent doesn’t come to fruition and they say, ‘well, it’s going be 15 or 20 percent.’ That could really upset the cart and play havoc with our state budget,” Eldridge said. The governor’s Insure Tennessee discussions will continue in eight more cities across the state.