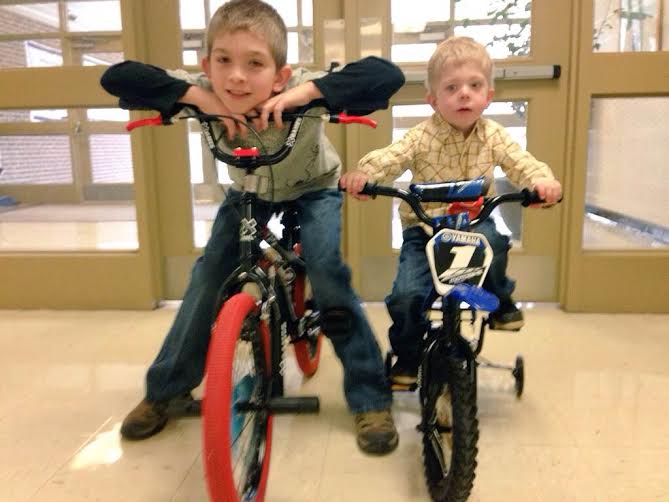 REAGAN, Tenn. — The halls of a Henderson County school turned into a bike track for two brothers who were in for a big surprise. When Dallas and Dalton got to school Monday morning, it was not just school work waiting for them inside the classroom. Last week on Dallas’ birthday, fire destroyed the shed in the Peterson’s backyard. One of the items destroyed was Dallas’ new bike, a present his dad had hidden there. “I bought it brand new the day before. I had it hidden out there,” the boys’ dad, Tony Peterson said. That is when teachers from Southside Elementary stepped in. “He was so excited about his birthday, so we just had to get him one,” said Mallory Bell who teaches both of the boys. The giving did not stop with one bike, though. With the help of People’s Bank, the teachers bought not one, but two bikes – one for Dallas, and the other for his older brother, Dalton. “They are truly God-gifted women. They are so precious. It touched my heart so much that they cared so much for these children as much as they did,” Lesley Peterson, the boys’ mom, explained. Bell said having fun is part of growing up. “They need to be able to go out and play and have fun, too. Fun is a lot more important than people think,” Bell said. Of course, the boys’ biggest anxiety of the day, came when they had to wait until school let out to take a ride on their new set of wheels.