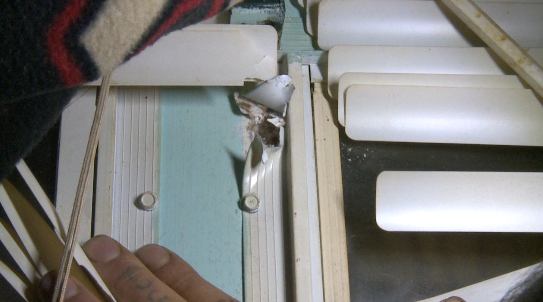 HENDERSON COUNTY, Tenn — Deputies are searching for a gunman after a rare drive by shooting threatens the lives of an entire family, Saturday. Investigators said the bullets pierced the walls of a home with a family inside, including a mother-to-be expecting twins. Jason Hamilton, who lives in the home, said the bullets pierced through walls of the home while he and his fiance, who is expecting twins, was asleep. “One come right through here, through the wall, and outside here on the top you can see,” Hamilton showed WBBJ 7 Eyewitness News. Henderson County Sheriff Brian Duke said at the time investigators are piecing together exactly what happened, but they do know someone was driving down Franklin Store road when three shots were fired. “The actual incident occurred around 6 o’clock that morning but he didn’t realize it was an actual weapon that had been fired he thought a rock had hit his window,” Duke said. “My fiance woke up, said someone is throwing rocks at the window,” Hamilton said. Jason Hamilton said the bullet holes show the shot went right by his roommate’s head and made it into the room where he and his pregnant fiance were sleeping. “When I think about it, it could have killed one of us in there, I could have woke up found my cousin dead, found my old lady dead beside me with two twins in her,” he said. Duke said while they do have a person of interest, they are not releasing a name. “Only one residence actually received bullet holes so we kind of feel like maybe it was targeted,” he said. Hamilton said he does not know who would want to hurt him. “Could’ve killed us in there, over something petty, over childish, kiddish games,” he said. Sheriff Duke said they are looking for help identifying any vehicle in the area at the time of the shooting.. If you have any information, call the Henderson County Sheriff’s Department at (731) 968-7777.