Fireman of the Year misses honorary banquet, fights flames instead 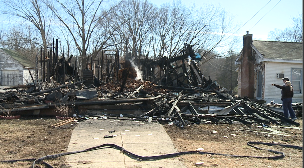 HUNTINGDON, Tenn. — A West Tennessee fire marshal is named the District 8 VFW Fireman of the Year but missed the ceremony. Steve Price said the decision to trade in the suit and tie for his turn-outs was a no-brainer. “I was done in the truck rolling that way in my suit and tie and everything and got a call paged out, and we turned around and come here,” Steve Price said at the historic home in Huntingdon that caught fire Tuesday night. When asked if he had second thoughts on missing the banquet to work he said,”I did not. This was my job, and I knew I needed to be here.” Price said it took about 45 men from four different districts to contain the fire in the home built in 1905. On Wednesday, the fire marshal was still keeping an eye on the hot spots.” I just try to do my job and give them 110 percent,” he said. Investigators said the fire was so violent it actually caused damage to both houses next door. A fellow veteran and friend of Price’s said he’s a great fireman. “He does a great job with what he does,” Jimmy Taylor said. Since he couldn’t make the banquet, Price says his fellow veterans delivered the plaque to the scene of the fire.”It just tickled me to death,” Price said. Eyewitnesses to the fire said Price is dedicated to his work. “It shows that he cares more about his job than the award, so he should get my vote too,” Josh Brown said. Price simply said he is making his dreams a reality. “This was my dream to come and be a fireman,” Price said. Price has also been named fireman of the year for the state. He said he is going to Nashville next month for that banquet. Price is now in the running for a national award. An official cause of the fire is unknown at this time.