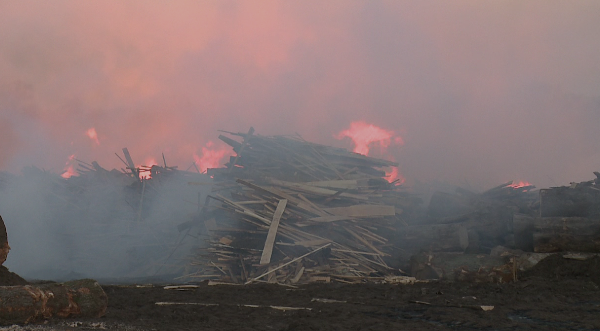 DENMARK, Tenn. — A fire broke out at Hooper Timber company in Madison County on Thursday morning. The owner estimates the fire caused more than $1 million worth of damage. “Just kind of looks like a war zone,” Timmy Hooper, the owner, said. Firefighters said they got the call around 6 a.m. Hooper said the fire burned wood slabs, mulch and a large piece of equipment. “I think it was just the combustion from the heat that was built up from the depth of the saw dust,” Hooper said. “It just caught afire, and it’s just been burning its way out.” Crews shuttled water to the flames, which Madison County Fire Chief Eric Turner said requires more equipment and manpower. “It’s a large fire, and the problem is the saw dust and the slabs are about 30-foot deep,” Turner said. The same property caught fire about two weeks ago and then rekindled. Turner said the cause of Thursday‘s fire remains under investigation. “We have had at least one piece of equipment burn up, so that’s a possibility it started in the area of that,” Turner said. Hooper estimated the fire caused more than $1 million worth of damage. “It’s just getting aggravat[ing] because we’re trying to work over there and of course when the wind changes it blows the smoke on us,” he said. The fire department said no one was hurt.