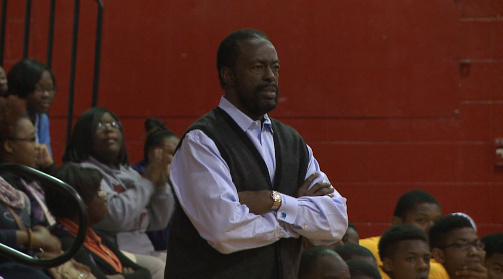 HUMBOLDT, Tenn. – Replacing former boys basketball coach Thomas Boykin at Humboldt isn’t an easy task. But Ronald Abernathy is getting off to a good start. “We are really going to have to work hard to exist. I really must say I really have been surprised,” said Abernathy. Abernathy’s shock comes from exceeding his own expectations in his first year. The Vikings 12-2 district record has secured them the runner-up spot in the 14-A. “It feels good knowing he knows exactly what’s he’s doing. You don’t second guess things,” said Humboldt guard Jaylon Strayhorn. Abernathy didn’t have to introduce himself to Strayhorn and his teammates. They googled him. “I saw he recruited Shaq [Shaquille O’Neal]. We already knew we were going to be good,” said senior Troy Agnew. Agnew says Abernathy’s previous coaching jobs at LSU and Lane College motivated them. As an associate coach with the Tigers, Abernathy led the school to multiple winning seasons and NCAA tournament appearances. The veteran coach also has the most wins in Lane College history. That impressive resume has earned the coach a nickname with his new team. “They definitely tease me. They call me ‘Old school’,” laughed Abernathy. “I tell them yes, I am old school. I’m going to be your dad and coach you.” “They call him ‘Old School’ because how he dress. He old, I guess,” smiled Agnew. Abernathy says he doesn’t mind the nickname because it’s helping his team perform well on and off the court. “If you get the best out of them individually off the court, it parlays to success on the court,” said Abernathy. Humboldt’s next game is at home against Greenfield on Friday.