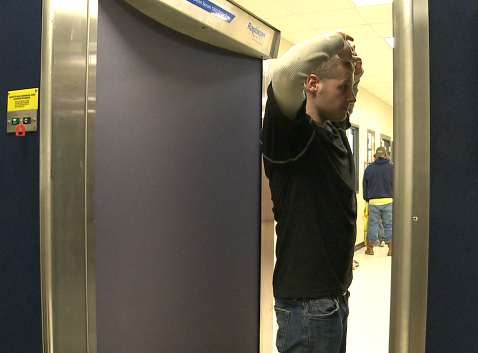 HENDERSON COUNTY, Tenn. — A high-tech addition to the jail leaves little to the imagination when it comes to searching inmates before they are allowed in their cell. It is a system Sheriff Brian Duke said is keeping drugs out. He said inmates who work outside the jail were sneaking in drugs and tobacco. “It could have been three, four, five times a week,” Duke said. “We don’t really know, and that was part of the problem.” But this new full-body scanner will show jailers what inmates are hiding. “It’ll find it. If it’s there, it’s going to show,” Duke said. “He (the subject) is slowly scanned on both sides checking for contraband, large masses, weapons,” correction officer Samantha Wood said. The revealing scan shows everything, then automatically erases after a few minutes. Duke said it gives all jail employees confidence. “Of course they feel safer too,” he said. “They know now they’re going to catch any weapons or anything like that.” He said it is important that well behaved, nonviolent inmates are given the opportunity to work. The scanner just helps keep them honest. “For the inmates, they’re getting good labor. They’re learning a good trade for when they do get out,” Duke said. The sheriff said they have not found any contraband on returning inmates or inside the jail since the scanner has been put to use. He said they were able to get the scanner at no cost from the government. However, the installation and training fees, totaling more than $7,000, were picked up by the city of Lexington.