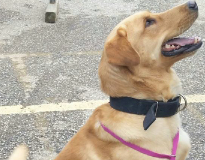 DYERSBURG, Tenn. — Beau the dog, once scheduled to be euthanized, will be taken to a new home instead. This comes after months of tug-of-war between the dog’s owner and the city of Dyersburg. Danny Higgins said he has been waiting for months for the day his dog would be free. On Friday, less than 48 hours after a new attorney took over the case, Dyersburg Judge Lee Moore said there would be no more appeals to extend Beau’s life. But the afternoon was spent making sure Beau would live. “I’m thrilled and Beau is thrilled, but nobody is happier than Danny Higgins,” attorney Samuel Muldavin said. “He has suffered terribly for probably the last six or seven months as Beau has, living in the shelter for all this time.” Beau was deemed a vicious dog last fall after police said he killed a duck and attempted to bite a boy. Muldavin said he spent Friday negotiating with the city of Dyersburg to make sure Beau would live. Beau will not be euthanized if he moves out of city limits, so an agreement was met Friday afternoon to microchip the German shepherd and lab mix and move him to the country. “With everybody’s help and cooperation, we reached what I believe to be a very fair and reasonable settlement,” Muldavin said. Beau was cared for by the humane society in Dyersburg. Higgins said he is overwhelmed by all the support and is glad it is over.