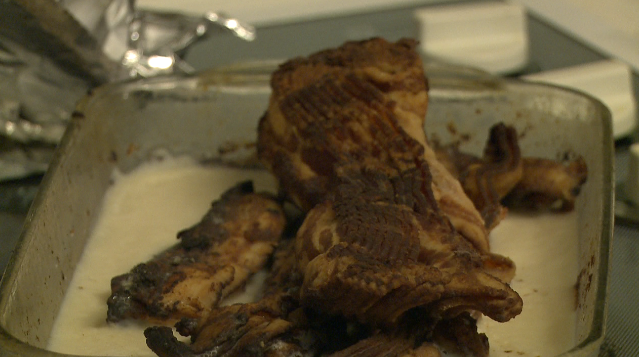 JACKSON, Tenn. — A south Jackson home was left ransacked Thursday afternoon after police say two teens sneaked into a man’s home and were living there while he was away on business. “They tore the door out of the house and broke the windows,” the homeowner’s mother, Doris Wooden, said. It is damage that Jackson police said was caused by two 17-year-olds. “These two juveniles apparently ran away from home several days ago,” Lt. Jeff Shepard with the Jackson Police Department said. “And it seems like they were just looking for a place to stay.” The homeowner’s mother said when she came to check on the house she knew something was wrong right when she opened the door, smelling something familiar coming from the oven. “My mother came in behind me and said someone’s cooking in here,” Wooden said. “I said, ‘No one’s here — who could be cooking?’ Then I noticed the stove was hot, and I open the door and they were cooking bacon.” Bacon, pizza and even beer were left strewn around the house after the two ran away. But they did not get away for long. “Thanks to concerned citizens in the area, they called in and gave us enough info where we could find them,” Shepard said. But just weeks after having a pipe burst in the home, Wooden said this has taken a big toll. “I think it’s sad for us to just go through water damage and then walk in on something like this where they did more damage,” Wooden said. Jackson police said they are not sure how long the two had been camped out inside the house, but they have been able to link them to one other home break-in in the area.