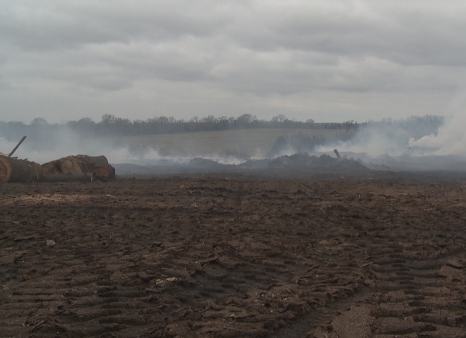 DENMARK, Tenn. — Smoke from a massive fire at a timber company in Madison County kept employees from work on Monday. The fire sparked late last week and has been burning non-stop. Smoke filled the air on day five of a fire at Hooper Timber Company. “Imagine breathing this all day,” Maintenance Manager John Wakefield said. The saw mills sit still. Owner Timmy Hooper said they sent employees home Monday because of the smoke. “The wind’s coming out of the north today, and it’s pushing the smoke all over our employees, so today we’re not getting to work,” Hooper said. The Madison County Fire Department said the fire is contained and confirmed they pulled their crews out around lunchtime Saturday. Hooper said the rain this weekend helped. “It’s burning underneath a little bit,” he said. “We’re just waiting for it to maybe smother out or more rain to put it out.” Hooper said they had machines running this weekend, trying to get the fire out for good. “We had a track hoe running, then I ran the dozer,” he said. “We just pushed it out and let the rain come down and try to help smother it out.” Wakefield said they monitor the fire. “I think we have to check it every hour to make sure it’s not getting any bigger,” he said. The owner said they also plan to keep an eye on the wind. “We’re just going to have to weigh our options here, you know, and hope the fire goes out soon.” Hooper also apologized to the neighbors for the smoke. “I’m sure they’re like us — they’re sick of it,” he said. Hooper said he has about 25 employees. It is unclear when they will be able to get back to work. Hooper said he is not sure if the employees will be paid during their time off.