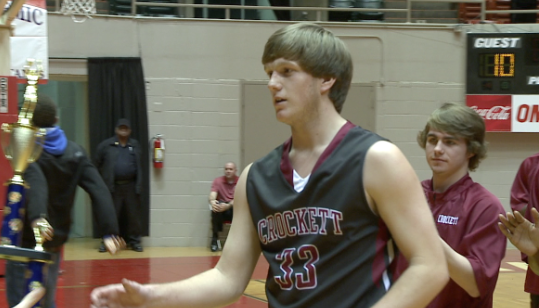 ALAMO, Tenn. – It wasn’t until his senior night that Crockett County’s Will Jones played this season. “It was like no other feeling. I didn’t know it was going to be as big as it was,” said Jones. The Cavaliers forward was benched before the season began after tears to his ACL and MCL. On Saturday, district foes turned friends in honor of Jones. South Gibson and Crockett exchanged free baskets just so number 33 could play. “Its tough, but you have to live with it. Worst things that could have happened,” explained Jones. Another shining moment was when the sharp shooter won a three point shootout at the Oman Arena in December on one leg. “I didn’t tell my doctors. They were kind of upset,” smiled Jones. Despite his injury, Jones hasn’t missed a practice or game this season. “He’s like a third coach over there on the bench. He’s always there for us,” said teammate Clark Scott. “He understands what we want as coaches. He’s able to relay it to the players better than we can,” said first year head coach John Sctigall. Jones says this season has been about life lessons. “Be grateful for what you’re doing. Don’t take anything for granted. Go 100% because you never know when it’s going to be taken away from you,” said Jones.