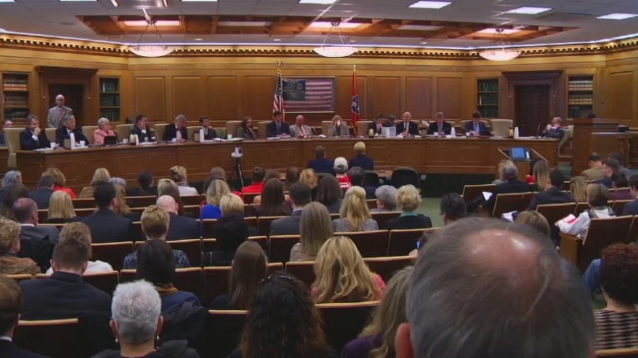 JACKSON, Tenn. — Seven state senators ended a push Wednesday for expanded Medicaid in Tennessee. Gov. Bill Haslam’s Insure Tennessee proposal died in committee by a vote of seven to four, never making it to a full vote during a specially called legislative session. Jackson’s newly elected Republican Sen. Ed Jackson was among the four who voted for the plan, and he says he’s not sure what the next step will be. “I’m a bit disappointed that the process didn’t go all the way through like it was designed to do,” Jackson said. Insure Tennessee was designed to provide insurance to about 280,000 low-income Tennesseans, and it was shot down by a committee of 11 state senators. “The people of West Tennessee, we owe it to them to have heard all of this,” Jackson said. “I’m sorry that did not happen.” Haslam spent 21 months negotiating the plan, which included elements such as vouchers to buy private insurance and co-pay requirements, but opponents said it would add to the federal debt under Obamacare. But now with no plan B for how to fix the state’s health care system, Jackson said this was a lose-lose. “We’re starting to see these hospitals close one at a time,” Jackson said. “This is going to hurt us economically when we try and attract industry into the area.” Jackson, who is on the senate health committee, was among only four to vote in favor of the plan. “I voted ‘yes’ mainly because I felt like it needed to go along to the other committees instead of just seven people deciding on it,” Jackson said. Jackson said most West Tennesseans he spoke with wanted to see the plan pass because of how unhealthy the state is. “We definitely need to work and address the health care issue,” Jackson said. “We are number 47 out of 50 states. We are on the bottom.” Our area’s largest health care provider, West Tennessee Healthcare, backed Insure Tennessee. CEO Bobby Arnold would not talk on camera but did release a statement saying he is disappointed in the vote. “We appreciate the efforts of everyone who supported Insure Tennessee and believe it would have been good for West Tennessee Healthcare and the state,” Arnold said.