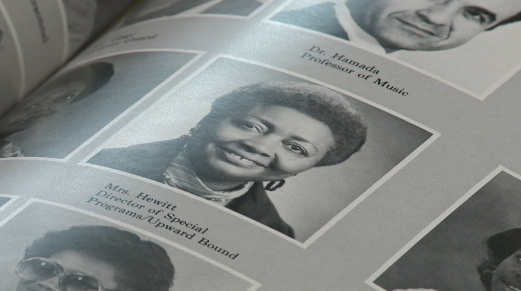 JACKSON, Tenn. — As she works to finish out her last semester at Lane college, Dr. Clara Hewitt is getting every last hour in making sure her students are able to learn. Hewitt has spent 63 of her 85 years helping students achieve their goals. “I decided early on that I didn’t want to chop and pick cotton for the rest of my life, so I decided I wanted to be like my high school teachers,” Hewitt said. Hewitt credits her parents with making sure her dream was realized. “They had no money, so my daddy sold a calf and got me in the first quarter,” Hewitt said. She held out a semester, though, so she could help her family finish the cotton season in Denmark. Four years later, she graduated from Lane College. “Somebody saw something in me early on, because upon graduation, I was asked by the president to stay on and serve as assistant librarian,” Hewitt said. Hewitt was promoted just five years later to head of the library. Hewitt, then Clara Denwiddie, also found the love of her life, Oliver Hewitt, on Lane’s campus. “We eventually married up as you call it, and the president of the college married us,” Hewitt recalled. The couple would later adopt two children. Hewitt said due to segregation, Lane was her only option for higher learning. Schools such as Tennessee State University were too far away, and she said with bus fare it was just too expensive. Hewitt said segregation was just the way life was “back then” but said the memory of the assassination of Dr. Martin Luther King Jr., the man with whom she shares a birthday, remains vivid. “He was a great inspiration to us, and of course when he was killed in Memphis, that was heartbreaking for all of the black community,” Hewitt said. Protesters came on campus, burned down the science building and attempted to burn down the library during a violent demonstration. Hewitt remembered having to pick out the ring leader, “Sister Soul,” to investigators. “They wanted to make sure they had the right one, so, looking through the one-way mirror, I said, ‘That’s the one,'” Hewitt said. But through it all, Hewitt has stayed focused on her purpose for being there — the education of students. Hewitt has directed a program called Upward Bound since 1966, recruiting and encouraging high schoolers to chase the same dream as her. “It’s the best thing that’s ever happened to me, to get an education,” Hewitt said. Dr. Hewitt will be retiring this May from her position at Lane College. Her other involvement in the community includes serving on the president’s cabinet and the archives committee, and she credits her knowledge of Lane College to her church, St. Paul CME in Jackson. When asked about retirement, she said relaxation is the goal, but she is excited to attend some of Lane’s events in the future as a retired member of the community.