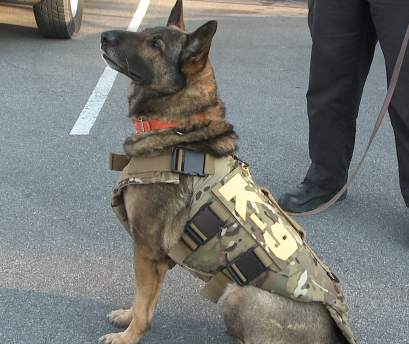 JACKSON, Tenn. — Charlie, an 8-year-old German Shepherd, is one of the Tennessee Highway Patrol’s best K9s in the state. He is used by the patrol unit to help track down fugitives, clear buildings for troopers and sniff out drugs. Charlie is a weapon the department wants to make sure is well protected at all times. “Oftentimes these dogs are deployed against violent and dangerous people, and they are usually the first ones in contact with them,” Lt. Brad Wilbanks said. Charlie is one of the patrol’s eight canine units that received bullet- and stab-protective vests. “It’s something to help him,” Trooper Brad Atkinson said. “Like I said, it’s a tool. It could help him in a bad situation.” Atkinson and Charlie have been partners for several years. Just last year, the pair was responsible for tracking down six fugitives and another already this year. “When you have a stop and you suspect something may be going on that’s wrong, a lot of the time the dogs stop that from happening and may save you,” Atkinson said. THP officials say the vests were donated by a nonprofit group based out of Massachusetts called Vested Interest.