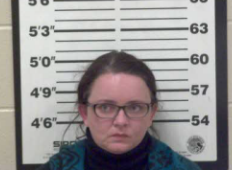 HENDERSON COUNTY, Tenn — The Henderson County Sheriff’s Department said it has finished an internal investigation into the death of an inmate from early Saturday morning. Sheriff Brian Duke said Monday the department is still trying to determine what caused to death of inmate Gina White, who was being held on aggravated burglary charges. White died early Saturday morning while she was being held in isolation. “We really can’t say other than just, we were monitoring her specifically,” Sheriff Brian Duke told WBBJ 7 Eyewitness News Monday. This weekend, a family member told WBBJ 7 Eyewitness News White was having medical issues. Sheriff Brian Duke could not confirm that information, because of HIPPA laws. The Sheriff did say the department reviewed security video and logs from Friday night to Saturday morning, and determined the jail employees did everything they were supposed to. “Protocols were met preliminarily. Logs were made. those things check out,” Sheriff Duke said. WBBJ 7 Eyewitness News spoke with the family of Gina White at her home in Lexington Monday. The family said they don’t have a comment, but they are waiting on those autopsy reports. The Sheriff’s Department also said they hope the autopsy report reveals how White died behind bars. “We are aggressively investigating the cause of this,” Sheriff Duke explained. “We hope that the autopsy results will come close to closing the investigation soon.” Sheriff Duke said he hopes to receive the autopsy in the next few days. The victim’s family said they are using this time to grieve and hope the results will give them answers.