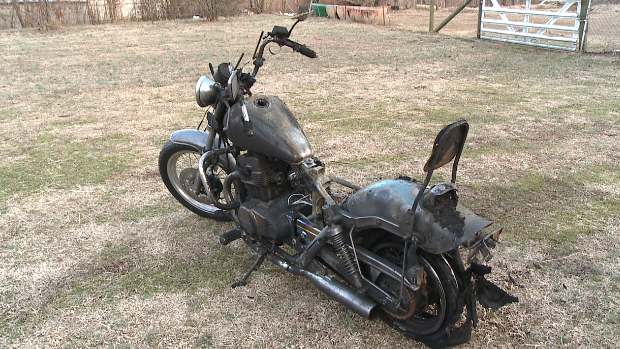 GIBSON COUNTY, Tenn. — A ball of fire rushes through a Gibson County man’s garage Thursday afternoon as he is working, but he escapes without a scratch. “I’m thankful I’m alive for one thing,” Warren Ayers Jr. said. Ayers walked away unscathed from a fiery explosion while working on his prized possession. “It was a beautiful bike,” Ayers said. “But of course it’s nothing now.” The bike is a 1986 Honda, one of only a few hundred Honda manufactured. Ayers said it was his blood, sweat and tears. “It just exploded, and fire flew up around me,” Ayers said. “It hit the motorcycle, and I ran out the door.” Ayers said he was making some repairs when the bike’s gas line snapped, sending fuel gushing to the ground. “The fireball could have burned him,” Gibson County Fire Chief Bryan Cathey said. “It could have set his clothes on fire or it could have knocked him out.” Ayers said a kerosene heater was on the opposite side of the garage from where he was working on his motorcycle. But when the gas line broke, the fumes were what caused the explosion. “You can’t work around fuel with a kerosene heater or flames like that,” Cathey said. “If you can smell the gasoline, you’re in a danger zone.” Ayers, who also cares for his ailing wife, called his shop a sanctuary of sorts. “So I just come out here, when someone was with my wife, just to get my mind off things,” Ayers said. But even after this close call, Ayers said he is ready to get back to work. “Oh yeah, I’ll get another one,” Ayers said. “I don’t know when, but it will be very hard to find another one like that though.” Fire officials said they want to remind people during the cold weather to be extra cautious when using fuel-burning heaters.