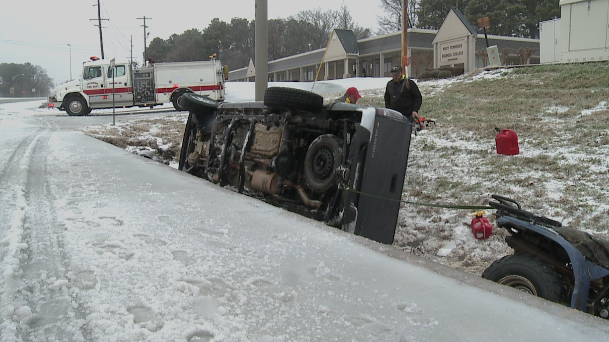 JACKSON, Tenn. — Winter weather caused problems for drivers in Jackson on Monday. The Jackson Street Department said crews are working around the clock to clear roads. “I’m sliding definitely,” driver Terence Clark said. “You just have to slow down and put it in a lower gear and just kind of cruise on it, don’t force it.” Clark made a pit stop to get ice off his vehicle. “It‘s causing a lot of trouble for the roads and people driving on it,” he said. Police responded to a wreck on the Highway 45 Bypass where a truck landed on its side in a ditch. Officers said the crash is weather related. The Tennessee Highway Patrol confirmed several cars went off the interstate. “The roads will be at their worst when they start to clear because there will still be icy patches,” Lt. Brad Wilbanks said. “People are gone get back to normal speeds and I assure you someone will be seriously injured or killed in this area in the next two days because of ice.” Crews with the Jackson Street Department salted and plowed city streets on Monday. “If you ain’t gotta drive, don’t drive,” Jackson Street Department Deputy Superintendent Percy Jones said. “If you’ve got to drive, give yourself some time and distance between cars.” The THP encourages drivers to buckle up and slow down. “There’s no rush today at all,” Clark said. “Nobody’s gonna blame you if you’re late.” Jones said they will be out until it is safe to drive.