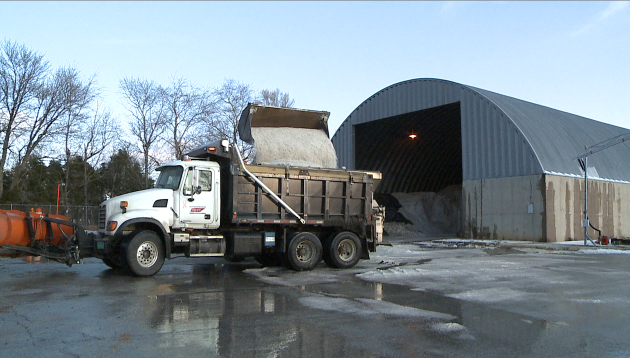 JACKSON, Tenn. — For a third straight night, West Tennessee road crews wage war against the ice and snow. With the threat of more winter weather on the way we wanted to know, do these crews have enough supplies to keep the roads clear? TDOT’s Jackson salt bin was filled to the top on Sunday. Now thousands of pounds have been removed, used to help de-ice most of West Tennessee’s roadways. But although it looks like they are almost out of salt, TDOT said they have plenty to get them through this storm. “As busy as we’ve been and still using the supplies we use, we haven’t had to re-order any supplies yet,” TDOT Spokesperson John Thomas said. “We’re still in good shape overall.” Crews have worked non-stop since Sunday trying to keep up with dangerous conditions not seen in a while. “This is one of the few times in the last few years that all of West Tennessee has been hit at one time,” Thomas said. But drivers said conditions have been improving day by day. “They have cleared up a lot of the roads so I’m pleased,” said driver Chirstina White. “I’m pleased to see that I can actually get out of my house and take care of business.” Salt and chemicals have been used by the ton, all part of TDOT’s $4 million budget. A number officials said they have never surpassed. “It varies year by year,” Thomas said. “Some years, it’s close to the $4 million, it just depends on how it goes.” Although total numbers for this storm have not been calculated yet and winter is far from over, officials said they are not panicking just yet. “We have a conference call a couple times a day with all the counties and everyone still has an adequate supply,” Thomas said. But while those supplies and budget continue to dwindle sometimes mother nature can lend a helping hand. “I was really glad to see the sun out today,” driver Ramona Beard said. “I knew if it was out, the roads would be a lot better.” TDOT has 20 salt bins across West Tennessee. They started the season with several thousands tons of salt. They say they will know exactly how much was used by the end of the week.