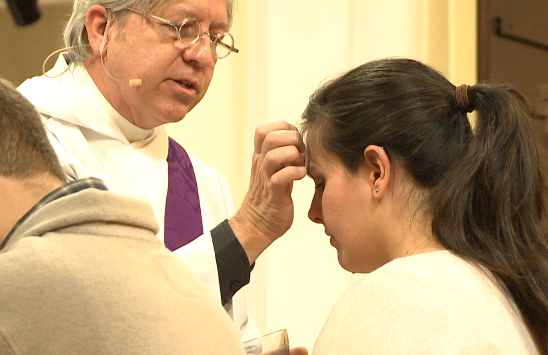 JACKSON, Tenn. — On Wednesday, the weather forced many area churches to cancel services. However in Jackson, Mother Nature was no match for Christians who celebrate Ash Wednesday which marks the beginning of the Season of Lent. Candy, carbohydrates, chocolate and alcohol are some of the things West Tennesseans said they are giving up for Lent. “It’s going to be a little difficult,” Ava Cox said. “For the most part when I’ve given up something I’ve done a pretty good job,” Domonique Early said. Ash Wednesday marks the beginning of the Season of Lent for more than one billion Christians. Deacon Tommy Rhoads at St. Luke’s Episcopal Church said the point of Lent is not just to give stuff up. “Reading scriptures and spending time in prayer, self-examination and taking on some new discipline,” Rhoads said. As tradition has it, many Christians sacrifice things they love over the 40 days before Easter, excluding Sundays. “I’m giving up sweets and liquor and also watching TV shows,” Trey Weise said. “I’m going to try to give up a many carbohydrates as I can it’s going to be really really hard I love my bread and cheese,” Gabi Cox said. “I’m going to give up candy and any sorts of chocolate of junk food,” Ava Cox said. The final day of lent is Holy Thursday, but for many it extends to Easter Sunday. Due to the ice and cold many area churches postponed their Ash Wednesday service until next week.