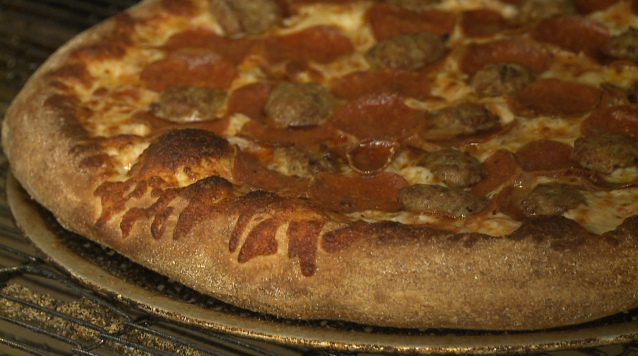 NORTH JACKSON — While many of us are indoors this week staying out of the cold, some local delivery drivers are working hard to keep Jackson fed. Mike Sullivan delivers for Marco’s Pizza. He has decided to brave the treacherous roads to bring food to those stuck at home. After a half-hour drive to a home just six miles from the business, Sullivan encounters icy roads and a wrecked semi-truck. Sullivan said he does not mind it. “I feel good about it,” he said. “It’s always greatly appreciated when they tip, and in this kind of weather they tip better than they normally would.” “We have been telling people it’s going to be two to three hours. Nobody seems to care,” Manager Don Starbard said. “So [we] just keep taking care of Jackson the best way we can.” Starbard said the calls are coming in nonstop and more than usual this week. “We typically do $1,800 in a day,” he said. “We’ve been doing about 26, $2,700 in a day.” Starbard said it’s Sullivan’s choice to go back out on the roads to deliver. “If someone says I don’t feel comfortable delivering, we will stop, and we’re not going to force anybody to risk their lives for pizza,” Starbard said. “It is just pizza at the end of the day.” Despite the great business, all of these pizza artists agree they’re ready for warmer weather and dryer conditions. “We will continue to forge through, and we’ll get through it,” Starbard said. “There’s nothing we can do. Just keep working, keep at it and feed as many people as we can.” Starbard also says they’re feeding the homeless who come in for warmth while they are open.